When I was around 13, I by chance decided to turn up to class one day. It was one of few days I actually walked away with something useful from school. It was art class.
Our art teacher had banned rulers and erasers from the classroom and anyone caught using them, had the items taken of them and thrown out the classroom window. He told us story of his daughters, both who love to draw, One stayed inside the lines and meticulously tried for perfection while the other scribbled and played and never worried about the lines. Guess who went on to become a successful person in the creative field? The second girl.
Mess can in some places be very useful. You use it to experiment with texture and media, to loosen up your hand for greater skill, you notice things you may wish to transfer over to a final piece or even experiment more with: Mess builds your art vocabulary.
Art isn’t just about drawing in a way to make something look as close to something else as you possibly can. It’s about expression and telling truths and invoking thought, questions or emotions in the world and about the world.
I think it’s important to practice art at a slightly more raw level. To scribble for the feeling of movement in your hand with out any thought to the end result, just the action of drawing. To throw the media on with no planning and build up a page of absolute nonsense and color and lines and scribbles and maybe even tongue prints 😉
Sketchbooks should mean it’s time to play not just time to work 😉 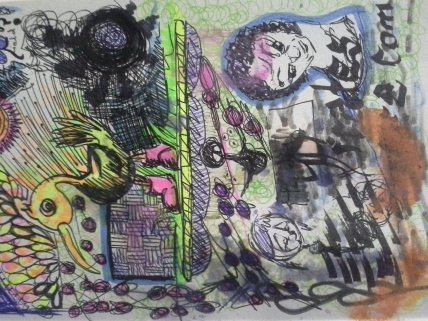